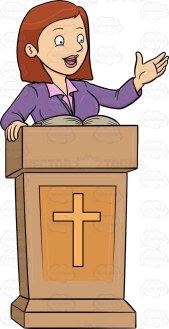 A woman with medium length red hair, wearing a pink collared blouse under a purple dress jacket, raises her left hand, as she preaches and reads the gospel from the bible on top of a wooden podium, with a cross sign engraved in front

Disclaimer: Recently, I have come to dislike the terms “liberal” and “conservative” because of the vast connotations associated with them, however, for ease of clarity I will use these two phrases.

This is the current story of my life:

Person: “I’m conservative and you aren’t.”

I have a confession to make: I have never fit in and for the most part I have liked it that way.  However, sometimes it does get a bit stressful because people have all these preconceived ideas of what makes someone Biblical.  Unfortunately in many evangelical circles you only have two options: you can either be a Bible-believing Christian or else you can be a liberal heretic.  People who advocate for female pastors are lumped together with those who are rioting for LGBTQ rights and who are super interfaith.  While there are many female pastors who do advocate for these types of things (and that is a matter of personal choice), it is largely unfair to label a female pastor as entirely liberal because there are so many different perspectives one can take on any number of topics.  Throughout my life, I have been asked repeatedly about my views on female pastorship.  People asked me what I thought before I went to Bible College, while I was studying, and after I graduated.  Since moving to Edinburgh I have been asked this question on at least 10 different occasions by at least 10 different people, so I thought that once and for all I would let you know where I actually stand.

Before I begin my discussion, I’d like to start out by saying we are all entitled to our own opinions on this topic.  I recognize that female leadership is still a hot-button topic in the church and it probably always will remain that way.  I’d also like to say that for me when someone disagrees with my thoughts on female leadership it doesn’t mean that I like them any less as a person.  In fact, I would say that at least 90% of the best friends I have in my life disagree with a woman being a pastor.  This has been challenging at times because it is not always easy to pursue a vocational path that your family and friends will not support you in, however, in the end of the day we remain friends because we realize that while we disagree on this one particular theological viewpoint, there are many other areas (of greater importance) on which we do agree.  In fact, having friends with various theological viewpoints is what shapes both of us and makes our time interesting!  I always try to respect my friends who disagree with female leadership because I know them personally and I know that at the heart of their thoughts is an intense desire and longing to serve Christ.  In a world that prides itself on feminism, it can actually be quite refreshing to see someone who has done careful investigative research and theological analysis and has arrived at a conclusion which is… well… somewhat controversial and counter-cultural.  I am even more impressed when these friends continue to cling to these beliefs because it shows a certain strength of character and willingness to remain firmly planted in Scriptures despite cultural pressures which occasionally even creep into the church.  I know that my friends do not disagree with me for the sake of argument, but because they want each theological choice in their life to reflect a more Biblical worldview.  In which case, I believe I have a lot to learn from them.

On the other hand, I reject the label of being a “liberal” (by which most mean “heretic”) simply on the basis of believing in female authority.  The reason is because I also have done careful analysis and poured a lot of thought into this particular issue.  I have done massive amounts of research and have struggled through the Biblical injunctions for a woman to remain silent in church.  Even today, I still cannot say that I am 100% convinced one way or the other.  I strongly lean towards the need for female representation within our churches, but I also want to stay as true to the text as possible.  [As an aside, I am not at all saying that my friends label me a heretic.  I think most of them know that I am a solid Bible-believing Christian.  However, I also think we are too quick to throw around the labels of “conservative” and “liberal” as an either/or category, rather than a both/and possibility].

A Confession: When I first started researching the topic of female leadership I was really super egalitarian.  Today, I almost hold a shared leadership position.  I believe it is important for both men and women to be represented in the church and I’m about to share why.  I realize that there are many churches today which are quite small and only have the resources to employ one pastor in which case the church must decide whether to hire a male or female.  However, even then, a person of the opposite gender should be in a recognizable role such as being an elder or a deacon or even the Sunday school superintendent!  Whereas, churches which are big enough to hire multiple staff members should, in my opinion, have at least one man and one woman on staff.  Ideally, in the traditional sense, the pastor could be a man and his wife could fill this role, however, this is no longer that easy because today most women work outside of the home.  And even if the woman is a homemaker it doesn’t necessarily mean she has the personality, aptitude, or spiritual gifts to provide this type of pastoral role (nor should it be expected of her!).  Now is not the time to go into a rant about whether or not women should work outside of the home (again, another matter of personal opinion).  Rather I am just sharing why “conservative” churches may not find the solution so easily in having a pastor’s wife as the leading woman of the congregation.  Additionally, I do recognize that many churches in Edinburgh do have a woman on staff.  She is usually called a “woman’s worker” and plays a vital role usually providing care and activities to the women and families in the church.  In this case, I would say that such a person is filling in a “pastoral” role.  In Canada, I have not experienced this as much.  It seems like most people who work in a church are pastors… that’s what makes this a little more complicated for me (because I’m trying to write from the perspective of two very different cultures).

The Benefits of Female Leadership:

There are several good reasons for having a female pastor.  Please let me share a few of them with you:

The Two Most Common Objections:

In the New Testament, we also have many brilliant examples of women in key positions of leadership.  For example, we read of Junia (who is outstanding among the apostles).  We read of Priscilla and Aquila (a ministering couple who ran a house church; in fact, some scholars believe Priscilla was mentioned first because she had a greater impact in the church than her husband).  There was also Phoebe (a deaconess).  In fact, what I find so shocking is that 7 out of the 25 names mentioned in Romans 16 (nearly 30%) were women – this is incredible given the widespread patriarchy at the time the Scriptures were written.  So you see, Paul valued women.  They had a tremendous impact in the life of the church.

One could make all kinds of inferences about Paul’s words including that he mentioned that a woman about to prophesy or pray in public should cover her head (https://www.biblegateway.com/passage/?search=1+Corinthians+11%3A5&version=ESV) which implies that women were publicly proclaiming the Gospel.  But that is outside of the point.  The point is that the Bible was written at a different time period than today and we would do well to understand the cultural norms and settings of that day.  This does not at all negate the fact that the Bible is the inspired Word of God.  It is not to say that simply because of the time period we should ignore what it teaches us.  Rather, if anything, it increases its credibility for this very reason.  Scriptures continue to inspire and transform us today, but theology is constantly in a state of flux.  Theology is constantly being shaped by our world-views and others around us, while still maintaining its divine authorship and message.

Conclusion: I hope that this background provides you with a bit more understanding of why I believe so strongly in female leadership.  I recognize that not everyone will agree with these thoughts, but I post them here as the basis of an on-going discussion.  More than anything else, we seek to please God and to live our lives for Him.  Whether or not you agree with female leadership, it is important to know all sides of the debate and to ask yourself which theological viewpoint will enable you to serve Christ the best in your own unique circumstance.

10 thoughts on “Confessions of a Theological Nomad (AKA: How You Can Be a Biblical Christian While Still Believing Women Can Be Pastors)”