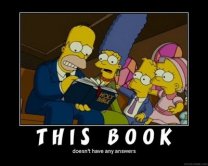 The following are some points that I have picked up through conversations with many atheists in both Europe and Canada.  That being said, I am not an atheist myself and therefore realize that my thoughts are biased.  I am happy to have a discussion with anyone who self-identifies as an atheist.  I also apologize in advance if anyone is offended by this post, but I also believe that what I share here is the truth….of course, if you’re an atheist you likely think otherwise.

Over the years I have heard the same responses from my atheist friends.  They ask me what the point of my faith is.  They say the Bible is just made up of feel-good fairy tales that are impossible and never happened.  Some of them have the audacity to say Christianity is basically a crutch to get through difficult seasons in our lives.  It can be easy to become offended at comments like these, but let me suggest another alternative to you: sympathy.  You see, I believe being an atheist is intensely hard work.  It takes a lot of brain and will power to convince yourself that there is no intelligent design, that there is nothing beyond the grave, and that there may be seemingly no meaning behind all the pain and suffering we experience in our world today.  That there is nothing better than what we already have and that all we have to live for is ourselves.  I don’t think I am brave enough to engage in this “eat, drink, and be merry for tomorrow you will die” mindset, nor do I think I have the strength to believe that there is no Infinite Being who guides us as a moral compass.  If you have that type of strength, then all the power to you, but I do not.  And I don’t think I ever will.  Below I’d like to highlight the three reasons why I am particularly glad I am not an atheist:

#1: Atheists Don’t Believe in the Power of Prayer – Over the last few weeks, I have been engaging in a lot of debates surrounding the issue of divine healing.  Do I believe in it? Why or why not?  The answer is: yes.  I have seen healing take place in my own life and in the lives of many others.  I have seen God opening doors because of prayer even though the world was doubtful.  I believe that prayer changes our hearts and attitudes.  Sometimes for whatever reason, God doesn’t answer our prayers like we would have wished, but many other times I have seen God working miracles because of prayer.  Therefore, I know first-hand the importance of intercession.  I believe that when we (collectively speaking) pray a great and powerful energy is being released.  God hears us because of our persistence and He honours our requests.  Prayer has sustained me through some very difficult times and seasons in my life.  In fact, I recently was reading a journal that I wrote when I was going through a particularly rough patch and nothing seemed to be working in my favour.  I wrote: “The prayers of the saints sustain me.  They are the only thing that has kept me going.”  In seasons of distress, when we cling to God, He does not disappoint.  He feels for us in the pain and sadness.  He encourages us and supports us.  He can do that when we are just praying to Him one-on-one and He can also do that when other people we know and love (or even sometimes don’t know) are remembering us in their prayers.  I would not trade this divine connection for the world.

#2: Atheists Don’t Believe in the Sovereignty of God – Atheists don’t believe that there is any form of Divine Power.  In essence, this means that humanity is responsible for itself.  I can think of nothing worse.  When humanity is in charge, it results in chaos.  Think about people like Hitler and Stalin… those are classic examples of when people didn’t seek God’s opinion, but just did what they thought they wanted to do.  It resulted in severe injustice and death.  Even the most moral of people are not capable of making the best decisions in each and every circumstance.  Yet, when we put our faith and trust in God, we believe that there is something greater than ourselves.  When we seek God in prayer and humbly ask for His guidance, He directs us to new places we never thought we could be before.  When things work out, it can be easy just to thank “chance” or “good luck,” but even my atheistic friends have admitted that there are times when there is really no logical explanation for some of the amazing events that have occurred.  Why put your trust in your own intellect and might when humanity in and of itself is not able to understand the vastness of the universe or the intricacies of even the smallest of animals.  Why not just put your trust in God who has created all these things and who we are told even loves and cares for us though we are relatively insignificant in the grand scheme of things.

NOTE: Here I wish to be very clear.  Not all atheists are like Hitler or Stalin… in fact, few are.  Many atheists can also be very loving people who do a great deal of good for our world.  We also have Christians who destroy this earth.  They ruin our ecosystem and hurt relationships.  Sometimes Christians can act even worse than someone who does not believe in God.  All I am saying is that if someone is passionately following God 100% of the time and seeking to do His will for their lives, I believe they have the opportunity to become moral for reasons other than morality’s sake.  Conversely, if someone is just living for themselves because they believe that there is nothing beyond the grave, the world becomes rife with opportunities for caring about nothing else other than self-seeking, gratifying pleasures.  But there are many who are in the middle.  After all, C.S. Lewis once wrote, “a cold, self-righteous prig who goes regularly to church may be far nearer to hell than a prostitute. But, of course, it is better to be neither.” (Mere Christianity)

#3: What If You’re Wrong.  This one gets to me every time.  I have some friends who grew up in the church, but have since left organized religion.  In fact, they want absolutely nothing to do with religion.  Period.  Sometimes these same friends will say to me, “it must be nice to believe that there is a meaning behind everything.”  Once I even had a friend admit she was somewhat envious of the fact that I believed God was in control over every aspect of my life: my marriage, my children, my future profession.  She said she wishes she could have that type of trust because it would likely make her feel better, but she just couldn’t bring herself to believe as I do.  This was so sad for me to hear.  I thought, “but you can.  You used to have it, but you chose to give it away for some reason.”

We are likely all familiar with Pascal’s Wager.  In this wager, Pascal says that we essentially have two options.  We can either believe that God is real or we can believe that He isn’t.  If we believe the first, that God is real, but it ends up that He really isn’t, what do we have to lose?  We end up dying and going into the ground.  We don’t rise again, there is nothing more, just the endless abyss – but it doesn’t really matter because we will be dead and thus it will not concern us.  On the other hand, if we believe that God is not real, and we die and find out He is, what have we got to lose?  Everything, including our own soul.  Therefore, it is really in our best interest to believe in God.

I see no reason why not to believe in God.  It seems to me that the Pros far outweigh the Cons.  Faith in God enables us to believe that there is something more than simply what meets the eye.  It reminds us that life is not only about us and therefore relieves us of a responsibility of trying to be in control, but also gives us an invigorating sense of wanting to change the world.  It surrounds us with friends who will pray for us during our darkest hours and who will truly be there for us.  It can radically change us to become more loving, giving, and self-sacrificial.  My question to you is this: why do you not want that?  Is believing that you were created by chance and that there is relatively little meaning to life because all we are going to do is eventually end up fertilizing dandelions really helping you to become more positive and happy?  I personally find the prospect of being an atheist to be rather dull and lifeless.  I even find it to be somewhat depressing because I feel like if I were an atheist there would be nothing to live for.  I would have an insane fear of death and being eternally forgotten.  I would wonder why I was born since people are only going to forget me after about three generations (if not sooner).  Instead I have put my trust in a loving Saviour who breathes life-giving messages of hope and peace into my life.  I have learned to find contentment in this life because I believe that it is really nothing more than a rest-over stop before my final destination which will be even more glorious.  A destination that promises no pain or heartache, no diseases or divorce, no abuse or apathy.  Doesn’t that sound amazing to you?  Then what’s holding you back?  Why not reach out, take that step of faith, and place your trust in the Eternal God who has truly promised us so much more. 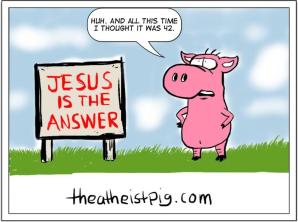 P.S. I came across these super interesting blogs after I had finished writing my own.  Although I still stick by what I shared, Courtney’s (AKA: Godless Mom’s) blog provided me with a bit more understanding and appreciation towards the atheist movement: http://jaysondbradley.com/2015/09/16/5-things-i-wish-christians-understood-about-atheists/#sthash.XHvalCon.dpbs.  Conversely, Jayson’s blog provides some sound insight on a reasonable Christian response to atheism and is also worth a read: http://godlessmom.com/guest-post-5-things-i-wish-atheists-understood-about-christians/.